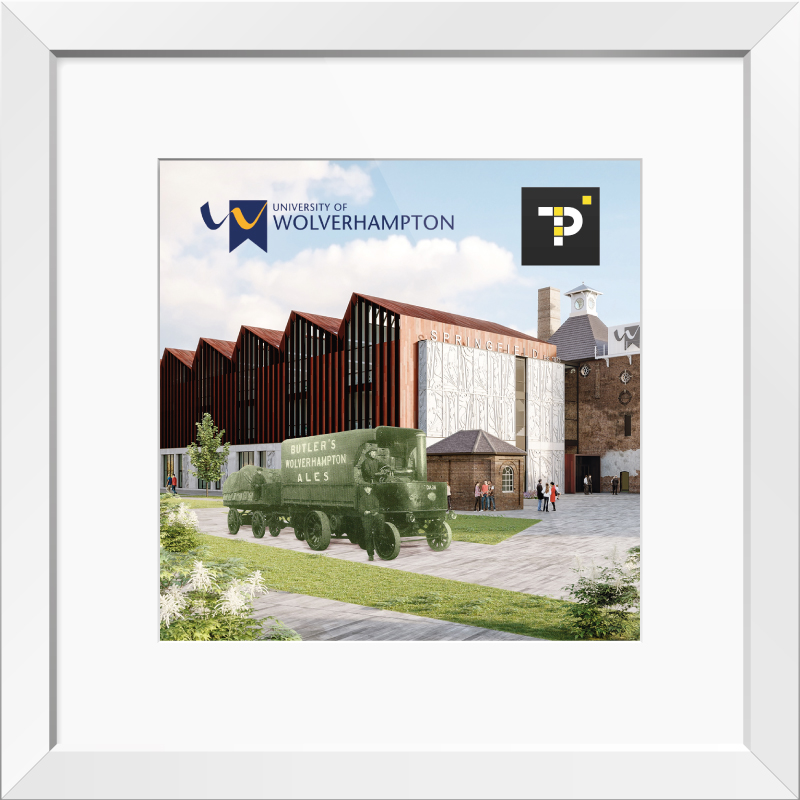 TPSquared is really excited to share that we have been successful in winning a tender with the University of Wolverhampton to produce a coffee table book showcasing the history and future of the new Springfield Campus. The site is a £100 million project turning the 12 acre, Grade II listed former brewery into an architecture and built environment super-campus.

We’ve assembled a great team, including well-known local historian, David Cooper, and renowned writer, Jon Griffin, to help create the publication. The book will show the historical importance of the site from 1873 through to how The University of Wolverhampton is transforming it for future generations.

The site is well known to our Designer, Dan. His father, David, was granted access to Springfield Brewery in 1997 shortly after it closed, along with photographer, Brett Prestidge. What they managed to capture on both still and film were images and footage no one will see the like of again. It can only be described as a scene from 28 Days Later or the Walking Dead – cups of tea, newspapers and some personal items just left untouched by the employees as they finished work there forever.

In 2004, The brewery was hit by a devastating fire and David decided to create a website and DVD with his collection of stunning images and film. Dan helped out on this project, creating the graphics and promotional items.

Skip forward many years and after the site had gone through a few different and unsuccessful plans of redevelopment, the University of Wolverhampton secured it and put forward their plans for a brand-new super-campus.

So, when we saw this opportunity to produce the historic coffee table book, we thought this is definitely one for us!

Even though, in times such as these, where it is difficult working on a project like this, gathering and relying on other sources for information, we are progressing well and it is starting to take shape.

Welcome to the team

David was privileged to have been a guest at the House of Lords Reception on 5th March 2017 to celebrate the ongoing development of the University of Wolverhampton’s Springfield Campus.

Having retired from his award-winning Wolverhampton-based public relations consultancy, he has exercised his growing reputation as a local historian and regular guest writer on heritage subjects for the Black Country Bugle weekly newspaper.

After a 45-year award-winning career as a journalist for leading regional newspapers, including the Wolverhampton Express and Star, Jon is now a West Midlands-based, freelance journalist writing for a variety of publications.